She walks slowly.
She moves as if the whole world is on her shoulder.
She cries and I hold her close.
I tell her we will get through this.
I don’t think she believes me.
The truth is I don’t think I believe myself.
I don’t know how to reach her.
I don’t know what to do.
I hide behind work, television and the computer.
She sleeps in the back room – the room of depression.
She will not come out to join me.
I don’t go there. It hurts too much.
I am helpless.
I pray.
He answers.
He is the answer.
Nothing is too difficult for Him.
I trust Him.
He is still Sovereign.
He will do what He will do.
I watch her.
She walks slowly toward me.
She moves as if the whole world is on her shoulder.
I hold her close; capture her tears and whisper in her ear,
“We’re going to get through this, Honey.
It’s going to be alright.”
And I believe it – she believes it too
We, together – mother and daughter – face another day because God does care.
An anxious heart weighs a man down, but a kind word cheers him up. Proverbs 12:25 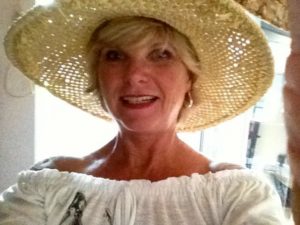 Chris Malkemes is a Christian, just like you. She’s not a pastor, missionary or elder. She’s found the secret in the Secret Place. Chris has an instructed ear and her tongue is the pen of a ready writer.

The Lord found Chris lost, alone, hopeless, helpless and homeless. She was raised in abject poverty, one of twelve children. With nothing more than a prayer of relinquishment she was delivered from bitterness, anger and so much more. Her uncle traveled hundreds of miles to bring her home, introduced her to Christ and sent her on her way.

Chris didn’t disappoint her Uncle. She worked hard to get her GED, enlisted in the Women’s Army Corps, seized a college degree and became a commissioned officer. Chris retired as a Major nearly a decade ago. She is a skilled facilitator, trained teacher and credentialed with the Assemblies of God. She married the love of her life nearly 40 years ago.  They have two adopted adult children and the best ever grand-dog, Jazzi Marie, who always comes to a whistle and the smell of good food.

Although Chris has no previous publishing credits, she writes today from the adventure of it all. Her calling: make the invisible God visible to hearts and minds.
She is fond of saying, “He treasures His treasure and His treasure I am.”
Connect with Chris on her blog | Twitter | Facebook

The Art of Hospitality
Reverence and Awe