I have been doing an in-depth study of Ruth over the past few weeks, and I can’t help but think about what she gave up in order to follow the one true God. After her husband died, she could have easily gone back to her people. She would have been provided for there, but she was faithful to God and vowed to stay with a woman who classified her life as “very bitter” in a culture that didn’t value women, especially unmarried ones. Yet, in her sacrifice God was faithful. Because of her obedience she not only was noticed by a man who would soon become her husband, she became the great-grandmother of Jesus.

Sacrifice is costly, but not as costly as disobedience.

There is something that I held onto for far too long. My life. For years I had turned away from the path He had before me. I knew He would always be there, so I knew that when I wanted to, I could always run back. There were so many times that I knew He was reaching out to me to come back, but I wasn’t ready. That is hard to admit, and it sounds terrible, but it was true. I lived my life how I wanted, and just like sacrifice is costly, so is disobedience.

I dug myself a nice ditch that I couldn’t get myself out of. As much as I tried, it felt like the ditch kept getting deeper and deeper.

But it was never as deep as His sacrifice, His love.

That wasn’t the first time I needed to sacrifice something to be obedient. Within the first few years of me coming back to my faith, I was involved in leading a few different things for the church, I went to (and am still going to). But I remember the day that He asked me to stop. I was beginning to prepare for a summer program that I was running, and it was like He put a big red stop sign right in front of me. And I didn’t understand. I liked what I did.

“I thought I was giving up it all…”

Why would He ask me to give it up? That wasn’t the only question that bothered me. What if there was nothing else ahead for me? What if ministry was over for me?

Because I was all in for Him, it seemed strange that He would ask me to give up what I felt was so much. The uncertainty scared me because I always had told God that I would go anywhere He led me. 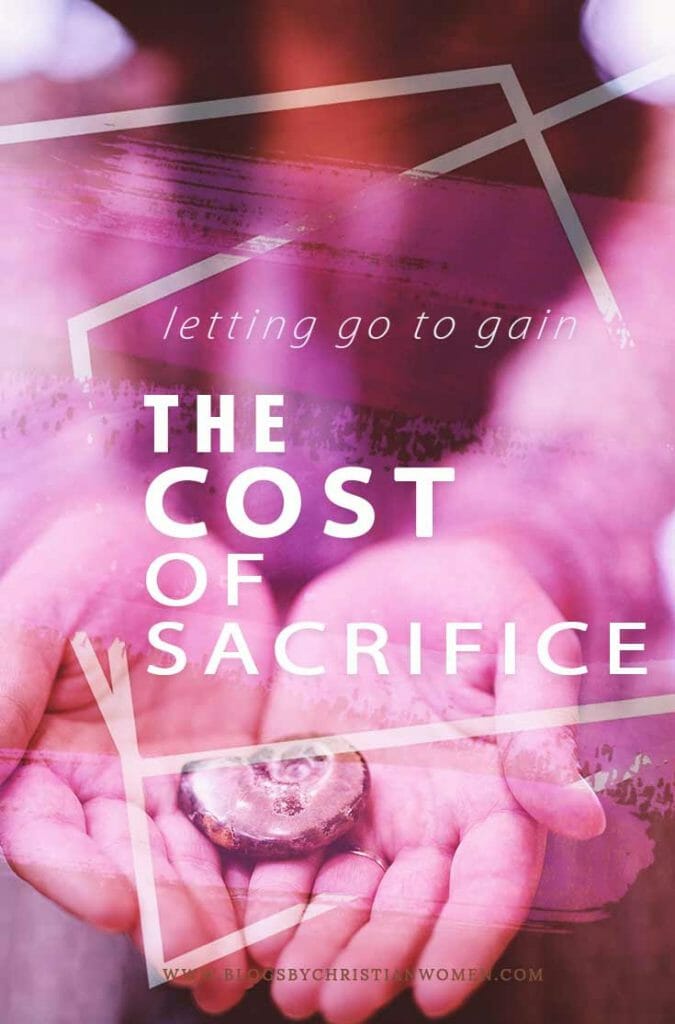 When I started to transition out of what I was leading my pastor actually asked to meet with me to make sure that something wasn’t wrong because it seemed out of character for me to give up so much as quickly as I did.

And He will ask us to give up things that we want to hold onto. Sometimes it will be time, finances, possessions, lifestyle, where we are serving, but no matter what it is, it will seem costly. To me, it seemed like I was giving it all up. But now I know that I didn’t lose it all. Not in the least. Because in what looked like giving it all up, I found my passion that sets my soul on fire. The place that I know where I am not on the sidelines, but in the center of His will for my life.

Sacrifice is a gift.

I gained it all, and not just passion. I gained Jesus. Knowing Him on a deeper level. And that is everything.  Not even our dearest treasure on earth is as costly as the sacrifice He made on the cross. I can’t even begin to wrap my head around the weight of that. And I bet the sacrifice in your hands feels like weight as well.

So many times we can feel like we are loosing too much when we give up the things we want to keep. But when we sacrifice, He gives us so much more than we could ever give up. May we never offer Him anything that costs us nothing.

What sacrifice are you willing to make in order to follow Him?

A Changed Heart on Display
God Cares, Even About The Little Things