I have a confession to make.  I am an extreme couponer.  No doubt you know someone like me, the woman at the grocery store with the binders full of coupons.  The one who blocks the aisles with overflowing shopping carts, holds up the checkout line and argues with the cashier about whether or not a coupon is still valid.  Yep, that’s me; but I’m not ashamed!

It’s not easy being a Coupon Diva.  It takes me hours upon hours to sort, cut out, and file the coupons into my two, obnoxiously big binders.  Then it takes me more hours upon hours to determine what stores have what deals.  Do they offer a two for one or a BOGO or a buy ten and get eleven?  Do they have a double coupon that expires in a few days?

When I finally map out and execute my itinerary for coupon day, I often spend over two hours in one single store.  That’s because I get distracted so easily.  Even if I plan on buying only certain items, it never fails that other items are on sale or clearance.  It’s very complicated and higher math-intensive being a Coupon Diva!

One day as I was cutting out and sorting coupons, I had to leave for an appointment in the middle of the chaos.  So I left everything where it was, on the floor, coffee table, kitchen counter, ceiling fan, wherever I could find space.

Long story short.  We have a cat named Oreo, inherited from my son, Zach, when he went away to Auburn University.  Oreo is very testy and temperamental, and when he feels like he hasn’t had enough attention, he “acts out” in the only way he knows by doing “his business” on something.  That afternoon when I left, I guess Oreo was feeling neglected and overlooked. 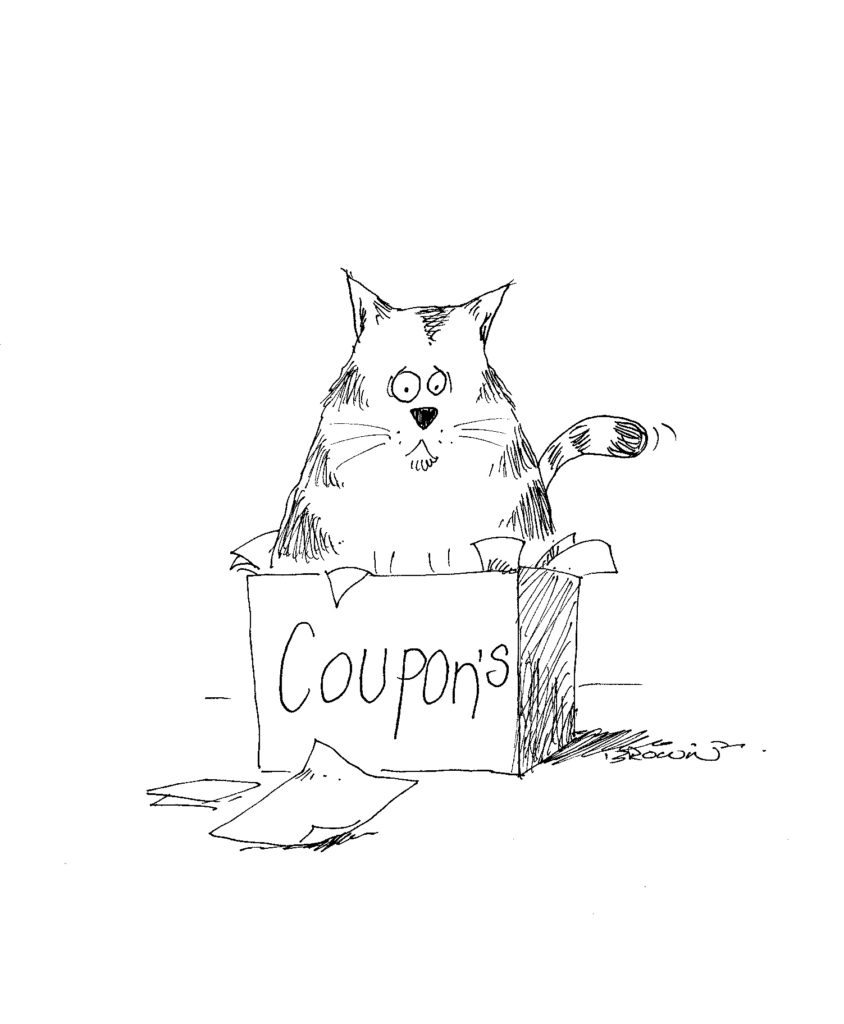 When I returned home to put my coupons away, I noticed that some were wet!  Yep, you guessed it!  And to make matters worse, several coupons were for $2 off the deodorant my son likes and several were for buy one, get one on the body wash.  I could save money and also help the smell in Noah’s dorm.  I told Donny, my husband, what had happened, and he said, “There’s no way you can use those coupons!”

Well, there’s no way I would let that statement stand! So I tried to air out all the “wet” coupons before I put them in a plastic bag to at least confine the smell.

The next day I went to a local store to partake of the great deals, but I decided to go to a store in the next town over.  I figured nobody would know me there.  As I was shopping, I noticed an item on clearance that I had a coupon for, but I wasn’t sure if it was a wet coupon or not.  So I opened the plastic bag to check, and whew!  The smell was overwhelming!  At that exact moment, a lady walked down the aisle and started to reach for the same item.  Her nose began moving like a dog’s nose when it’s sniffing a place to do its business.  She started coughing and gagging, and her eyes turned red.  She looked at me with that twitching nose and those watering eyeballs and walked as fast and as far away as she could.

I ended up at the register with my smelly coupons.  The cashier tried to pretend that she didn’t notice, but I’ve never been checked out faster.  I walked out of the store with A LOT of deodorant and body wash to give to the smelly soccer players.

The moral of this story is this.  We all smell and that odor is sin. Just think how we appear to others when we sin, dirty and dingy, grimy and grubby.  But God has a Coupon for that, a really Great Deal!  All we have to do to redeem it is give Him our hurt and offer Him our heart.  No matter how smelly and sinful we are, God doesn’t see us as mankind sees us.  No, God sees us as His beloved children and He promises to wash us white as snow.