Have you ever had one of those periods in your life where all of a sudden EVERYTHING is just wrong? You were going along just fine (or so you thought)

…loving the Lord
….loving your family
…..trying to meet the challenges of work and life in general with joy and faith
….reading your Bible and praying and attending a ‘good’ church.

Then things start to splinter away. It seems manageable at first BUT all of a sudden you’re in over your head. And you wonder where God is and how it happened and worse, where it will go from here.

I had a time like that. I married a wonderful Christian man, had two wonderful children, a nice home, a job doing something I love and a fantastic church. Then it all started to change. One day I woke up and realized I was a divorced single mom with two kids, had lost my home, had to move back in with my mother, had no savings, was under-employed with a boss that hated me, and couldn’t seem to find a church home. I was devastated. The divorce left me feeling unwanted and unloved. Losing my special home and having to move back in with a mom who was always critical of me made me feel like a failure. My boss and co-workers not accepting me or my faith and in such an aggressive manner left me feeling rejected and alone. I felt awkward and different like I didn’t fit in anywhere.

There is a lake where I work. At lunch and during my breaks, I would walk around it and cry and try to talk to the Lord. There were a lot of waterfowl in the lake -ducks, herons,kingfishers,egrets and one stood out. He was alone. He was different. Everyone would point at him and laugh or curl up their nose and say “what kind of duck is that?!?!” His honk sounded like grinding machinery. He had huge, bright pink feet. He had large blotches of various sand and brown colors and he had brown rings around his eyes that made it look like someone had punched him in the eyes. 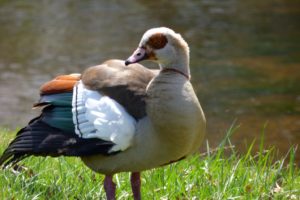 One day God said to me “you watch what I’m going to do with him”.
Over the next two years, I watched as God transformed this goose’s whole life. First, he met a new wife, a mallard duck. You would always see them swimming together in the spring they had about twelve babies! Usually, baby ducks don’t fair that well, and only a few actually make it to adulthood. Not with Egypt’s babies. He stuck by them every day and was a fierce protector and a good provider. He walked them around in the pouring rain so they could get the nourishment they needed. He took on any hawk or goose that tried to get near with a dazzling display. Everyone one of his babies grew up every time. He was amazing. Soon people began to take notice of what a magnificent father he was. They were not laughing and pointing anymore. They would come to the lake and stand on the bridge and watch for him.

God completely restored him and gave him more to boot. He had a wonderful wife, lots of magnificent children. He was in his element -good at his job and greatly respected and loved.
God said to me “remember when I said to watch what I would do with him?”

Then the Lord said “I’m going to do the same with you” and He has.

So, if you’re in one of those places, take heart, it may not seem like it, but God is near. He will never leave you or forsake you. He loves you. He still has a good plan for your life and the power to bring it to pass and yes, he’ll do the same for you too.

The Battered Woman
Of Purple T-Shirts and Grace-Filled Battles