If there’s one thing I’ve learned over the years, it’s that God’s plan for me is not always (if ever) the plan that I have for myself.  I can’t count the number of times in the past two years alone that I’ve found myself saying that I never would have chosen this path that God has chosen to take me on.  Never. 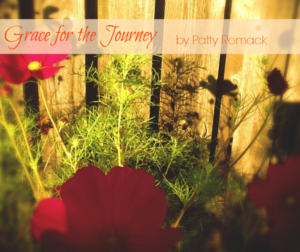 Eleven years ago, my dad was diagnosed with early-onset Alzheimer’s at 53 years-old. I can’t begin to tell you the agony that our family walked through as we watched my dad slip away, more and more each day. And quite frankly, I couldn’t accept it.  I couldn’t accept the fact that my dad –my hero–could no longer do the things he used to do, and that Alzheimer’s was stealing him from me.

And you know what? I wrestled with God. I was angry at God for allowing my dad to have this awful disease.   And though I begged and pleaded with God to heal my dad and give him back to me, He didn’t.  And I just couldn’t accept that.  I mean, how could someone who’d faithfully served God for many years end up with a disease that robbed him of his mind, and his family?

Years into my dad’s illness, a good friend introduced me to the book, Trusting God, Even When Life Hurts, by Jerry Bridges.  God used that book to drastically change my life. It was through that book that I learned of how God allows and uses the hard times in our lives to sanctify us and make us more like him.  Little did I know how much I’d need to to rely on this knowledge later on down the road.

Nine years after his diagnosis, my dad went home to be with the Lord. And rather than being angry with God, I was now able to see that, by bringing my dad home to be with Jesus, God was actually healing him, and making him whole once again.

Less than three months after losing my dad, the bottom fell out of my world. Our 18 year-old daughter walked out–half-way through her senior year in high school, with no job, no transportation, and with nowhere to go. And what’s worse is the fact that we never saw it coming; her actions shocked and devastated our whole family. My husband and I, along with our four younger children, stood crying and pleading with her as she walked out the door.

The days and months that followed that horrific day were filled with one tragedy after another, each one caused by poor choices our daughter made. I felt as though I was on a ship, with waves crashing around me, threatening to tip me over. And as soon as the storm would die down a bit, the winds would pick up and once again threaten to take us down.

It was during this time that depression began to settle in with me, whipping me around, to and fro,and all the while, me feeling as though I were in a dark pit, unable to find my way out. There were days that I didn’t want to get out of bed, and probably wouldn’t have had my sweet husband not encouraged me and helped me on those hard, dark mornings.

It’s been two years since that dreadful day she walked out, and I’m sad to say that there’s been no restoration between us and our girl, if anything, things are worse. She no longer wants anything to do with us, and has gone so far as to tell me not to contact her anymore. And though it’s been two years, not a day goes by when I don’t miss her and long to hold her in my arms, if even for a moment.

While I wouldn’t have chosen this path, I can honestly say that I am so grateful for all that God’s taught me along the way. He’s used this trial to make me a better mom to my little ones, and He’s given me a burden for other parents who may be going through tough times with their kids. He’s also helped me to see that my kids belong to Him, and that no matter what kind of parent I may or may not be, ultimately, the choice whether or not to serve God is theirs.

We serve a good and faithful God, and He cares deeply for his children. He weeps with those who weep, and He sees our every tear. And no matter what you’re going through today, He cares and He longs to fill you with the peace that surpasses all understanding. Patty is a wife and mom to five beautiful children.  She loves chocolate, Karen Kingsbury novels, blogging, and most of all, she loves Jesus.   She loves to share the journey that God has taken her on, in hopes that her life can encourage others who may be on the same path.  You can learn more about Patty by checking out her blog, Grace Unending and she can also be found on Twitter (@graceunend) and Google + (http://plus.google.com/+pattyaromack)
Refreshed, Revived and Restored
Walking Along the Road