Do you know your Enemy?

Picture this, you are the general in the army and it’s your job to make a plan of attack. How well do you know your enemy so that you can catch them off guard and vulnerable? If you don’t do your research and get to know who you are going against it’s hard to defeat them, right? This is the same way we should be with Satan. We should know and recognize what is from God and what is from Satan. I have a few facts from the Bible about Satan for you.

1. Satan was the most beautiful Angel

In Ezekiel 28 it says they Satan was dressed in splendor, robe studded with jewels and gold. He was strolled in magnificence. Wow, could you imagine? Satan was pure perfection until evil was detected inside him.  He turned violent and sinned.

“You had everything going for you; You were in Eden, God’s garden, You were dressed in splendor, your robe studded with jewels: Carnelian, Peridot, and moonstone, beryl, onyx, and jasper, Sapphire, turquoise, and emerald, all in settings of engraved gold. A robe was prepared for you the same day you were created. You were the anointed cherub. I placed you on the mountain of God. You strolled in magnificence among the stones of fire. From the day of your creation you were sheer perfection . . .and then imperfection—evil!—was detected in you. In much buying and selling you turned violent, you sinned! Ezekiel 28:12-16 MSG

This is like us. We are perfection as babies right? Then we grow up with sin inside us. That sin then comes out.

2. He took angels with him

Satan managed to convert other angels. They fell and got cast down with him. The followers of Satan don’t receive bodies but are spirit in form. They try to tempt us to make wrong choices and avoid repentance so we will suffer the same pains of hell that they will eventually have to. These are his helpers and they listen to your doubts and fears and make us sin. These are not real people, just spirits that go around and make us sin.

“The great Dragon—ancient Serpent, the one called Devil and Satan, the one who led the whole earth astray—thrown out, and all his Angels thrown out with him, thrown down to earth.” Revelation 12:9-12.

So, Satan has help.

Satan was the chief of Music when he was in heaven. This means that Satan hates us to listen to praise songs and worship God. You should play Christian music when you are stressed out or feel that you are being attacked. He will flee. Trust me it works, I get stressed out and I tell my Alexa to play my Christian radio and I feel better. Make sure you sing and thank God. 🙂 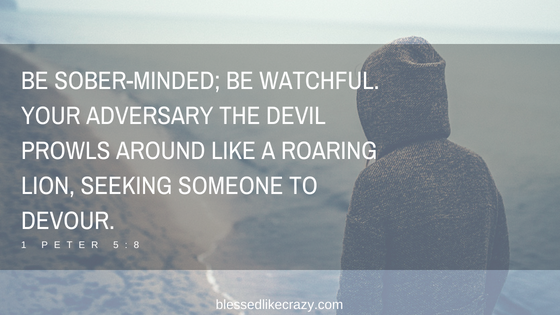 4. Satan is set here to kill and destroy

All Satan wants here on earth is to kill and destroy you. Wanting to have more that are going to hell with him. To do this he tells us lies and makes us sin. He started with Eve in the Garden of Eden. Whispering to her and coming to her as a serpent.  Surely, God did not say you would die. He just did not want you to be like Him. A God.

Now the serpent was more crafty than any other beast of the field that the Lord God had made. He said to the woman, “Did God actually say, ‘You shall not eat of any tree in the garden’?”  Genesis 3:1

He whispers things to us that make us fear, doubt, sin, anger, creates addition’s, you really need to stop and think. Is this from God or Satan? We love our loved ones but may hate the sin that they are in. Cast that sin out and you will surely see that person change. It is not the person we hate it’s the sin.

Like Satan tempts you and me he also tempted Jesus.

Then Jesus was led up by the Spirit into the wilderness to be tempted by the devil. And when He had fasted forty days and forty nights, afterward He was hungry.  Now when the tempter came to Him, he said, “If You are the Son of God, command that these stones become bread.” But He answered and said, “It is written, ‘Man shall not live by bread alone, but by every word that proceeds from the mouth of God.’ ” Then the devil took Him up into the holy city, set Him on the pinnacle of the temple, 6 and said to Him, “If You are the Son of God, throw Yourself down.

For it is written:
‘He shall give His angels charge over you,’
and,
‘In their hands they shall bear you up,
Lest you dash your foot against a stone.’ ”

Jesus said to him, “It is written again, ‘You shall not [a]tempt the Lord your God.’ ”
Again, the devil took Him up on an exceedingly high mountain, and showed Him all the kingdoms of the world and their glory. And he said to Him, “All these things I will give You if You will fall down and worship me.”
Then Jesus said to him, [b]“Away with you, Satan! For it is written, ‘You shall worship the Lord your God, and Him only you shall serve.’ ”
Then the devil left Him, and behold, angels came and ministered to Him.

We are strong too!

If the devil tempted Jesus and He did not sin and was man, why do we fall short? Well, we listen to those lies and most of the time we are not communicating with God enough. Because when we are in fellowship with God, He brings a confidence and strength within us. That Holy Spirit is inside us and the Word is there to cast out sin and be our strength and power against Satan. It’s the using and taking action part most of us have problems with.

6. Satan has already been defeated

This is the best part. Satan has already been defeated and it is written.

“Then I saw an angel coming down from heaven, holding in his hand the key to the bottomless pit and a great chain. And he seized the dragon, that ancient serpent, who is the devil and Satan, and bound him for a thousand years, and threw him into the pit, and shut it and sealed it over him, so that he might not deceive the nations any longer, until the thousand years were ended. After that he must be released for a little while.” Revelation 20:7-10

Behold, I have given you authority to tread on serpents and scorpions, and over all the power of the enemy, and nothing shall hurt you.  Luke 10:19

And they have conquered him by the blood of the Lamb and by the word of their testimony, for they loved not their lives even unto death. Revelation 12:11

Inviting God into Every Page of Life
Really….It’s Ok to Laugh!