I recently made a promise to myself that I would begin reading more books. Call it a new year’s resolution, or call it a productive goal; what matters is the thing itself. They say reading makes you a better writer and improves your overall emotional intelligence, but I have to admit neither of those reasons is my primary concern. I believe there is something unexplainable that occurs when you pick up a good book and spend time immersing yourself in the story. You go somewhere else in a way that doesn’t quite happen when watching a TV show or a movie.

When you watch TV or go to the movies, the story is happening right in front of you – nothing is left to the imagination. It’s all spelled out; the color of each character’s eyes, the way the sun shines on the grass outside, the look of each brick on a house, the sound of the wind blowing. These things do not make much of a different or impact on your experience because you do not have to acknowledge or think of them as the plotline unfolds before you.

However, when reading a book, the author encourages – no, forces – you to put together a complete image in your mind of every single detail described in the imagery. Take this passage from the classic novel Anne of Green Gables:

“It was October again… a glorious October, all red and gold, with mellow mornings when the valleys were filled with delicate mists as if the spirit of autumn had poured them in for the sun to drain — amethyst, pearl, silver, rose, and smoke-blue. The dews were so heavy that the fields glistened like cloth of silver and there were such heaps of rustling leaves in the hollows of many-stemmed woods to run crisply through.”

Could any photo of fall leaves or a video shoot driving through an Autumn forest ever give you quite the feeling of utter immersion in the season more than a passage like that? I am almost positive the answer is no.

So, long story short…the point of these last 400 or so words is that I want to read more to experience stories more fully, more vividly and more tangibly. Where does that takes us now?

Glad you asked – the answer is that it takes us straight into the entire purpose of this entry, which is to write to you about a certain passage I came across recently (in my ongoing attempt to read more) in the acclaimed children’s epic, The Lion, the Witch and the Wardrobe by C.S. Lewis. Now that I’ve mentioned his name, I feel as though I could talk about him for days, but I will save those thoughts for another time. I’m sure the time will certainly come.

To return to the main plotline of this post however, the passage that struck me reads:

“Aslan a man!” said Mr Beaver sternly. “Certainly not. I tell you he is the King of the wood and the son of the great Emperor-beyond-the-Sea. Don’t you know who is the King of Beasts? Aslan is a lion – the Lion, the great Lion.”

“Ooh!” said Susan, “I’d thought he was a man. Is he – quite safe? I shall feel rather nervous about meeting a lion.”

“That you will, dearie, and no mistake,” said Mrs Beaver; “if there’s anyone who can appear before Aslan without their knees knocking, they’re either braver than most or else just silly.”

“Safe?” said Mr Beaver; “don’t you hear what Mrs Beaver tells you? Who said anything about safe? ‘Course he isn’t safe. But he’s good. He’s the King, I tell you. As most people already know, The Lion, the Witch and the Wardrobe was written not only to serve as a sweet and entertaining story for children but also to act as a parallel representation of Jesus’ sacrifice for man, His resurrection and the nature of God’s relationship with His people. If you were not aware, here is what C.S. Lewis wrote about his intentions in creating this famous and beautiful allegory:

“What Aslan meant when he said he had died is, in one sense plain enough. Read the earlier book in this series called The Lion, the Witch and the Wardrobe, and you will find the full story of how he was killed by the White Witch and came to life again. When you have read that, I think you will probably see that there is a deeper meaning behind it. The whole Narnian story is about Christ. That is to say, I asked myself ‘Supposing that there really was a world like Narnia and supposing it had (like our world) gone wrong and supposing Christ wanted to go into that world and save it (as He did ours), what might have happened?’ The stories are my answers. Since Narnia is a world of Talking Beasts, I thought He would become a Talking Beast there, as He became a man here. I pictured Him becoming a lion there because (a) the lion is supposed to be the king of beasts; (b) Christ is called ‘The Lion of Judah’ in the Bible; (c) I’d been having strange dreams about lions when I began writing the work. The whole series works out like this.”

So, let us get back to the passage I referenced as one that felt heavy on my heart.

Something that has tugged at me over the last few days in my newly-refreshed walk with Christ is that following God is not the smooth, painless path described to us in our childhoods (those of us who grew up in the church, anyway). It seems like my memories of bible lessons from Sunday School often featured a narrative of Christ that was flowery and sweet. They often switched between two distinct modes: 1) Heroic tales of the Old Testament – think David and Goliath, Moses parting the Red Sea, Jonah and the whale, Noah’s ark etc. And 2) Stories of love and encouragement from the New Testament – often found in the Gospel chapters or Romans or Philippians.

Let me say now that I am entirely grateful for my upbringing in the church. In no way do I suggest that we start educating our youth on the tough, harsh or downright scary aspects of the Bible. I understand that children need a different kind of spiritual nourishment.

However, this leads me to my next point – and that is that a theme I have seen as I grew older and continued learning about Christ was that the watered down, fairytale version of the biblical stories didn’t seem to fade very much. In America, and no doubt in other parts of the Christian world, we are experiencing a new kind of Christianity – a “safe Christianity.” One that preaches the prosperity gospel, universalist theories and even goes so far as to accept that other gods from different religions are ok in their own rite.

I suppose the real message of the Word of God, while it does contain such teachings as the ones we learned in childhood and ones of prosperity and God’s goodness, is just a little too scary for most adults to accept. It is easier to hold on to the easy, the sweet. Who would want to choose the darker, more treacherous path instead of the sunny, well-paved option? Who would want to eat vegetables and nutritious foods when given the option to choose a piece of cake? These questions seem quite trivial when they are compared with the matter at hand, but I just had to have my shot at crafting out a metaphor.

I’ll attempt to come full circle now with entire meaning behind this essay – and that is this:

When I read the line “’Course he isn’t safe, but he’s good,” a reference to Aslan, the ruler of Narnia, I could not help myself from thinking about our own Lord. (Who, as mentioned earlier, is a literary representation of Christ.)

Is this not true of our God? Is following Jesus Christ truly “safe?” In relation to our salvation and the life to come, nothing could be more secure. But in terms of our life here on Earth, I believe the answer is no. Choosing to truly follow Christ and make Him the ruler of your life is not a safe thing to choose, especially in this day and age. God leads His followers down difficult and sometimes frightening paths as they walk in His will. He calls us to be different from the world, often leading to scary conversations with friends, coworkers and even family.

All the stories of our childhood that were painted to be safe for children’s ears are in all actuality, stories of heroes who followed God into absolute mortal peril. Jonah was swallowed by an enormous, and undoubtedly carnivorous, fish [Jonah 1:17]. Noah was faced with the demise of the planet and faced intense ridicule for his obedience [Genesis 5:32]. Daniel was thrown into a den with hungry lions [Daniel 6:16]. Shadrach, Meshach and Abednego were burned alive [Daniel 3:16]. And do I even have to spell out Job’s suffering [The book of Job]?

These brave figures did things that many of us would never dream of doing in today’s world. And remember, they experienced God the same way we do now – Jesus had not come to Earth yet – people knew God through His spirit alone, the same spirit we have with us right now.

Is God safe? I think the only safe thing is to conclude is that no – absolutely not. He is not a safe God. He does not want us to lead safe lives. But – is He good? Absolutely. Without a doubt, our God is the very definition of goodness. He loves us with an eternal love we cannot begin to comprehend.

So, in conclusion of this very lengthy post, let’s all take heed of Mr. Beaver’s words from the story of The Lion, the Witch and the Wardrobe when he tells the children that Aslan is not safe, but he is good. We cannot expect to lead a safe life walking with Jesus, but we can expect that He will love us and care for us no matter the obstacles that come our way. 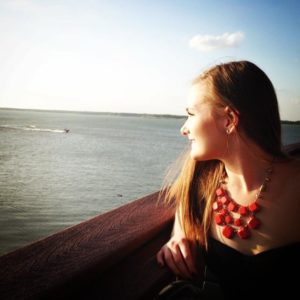 I write for the blog, Kingdom Contemplation. Finding eternal meaning in everyday things is something I believe is essential for every Christian in order to stay connected with God and keep our faith fresh. Writing in Kingdom Contemplation is my way of recollecting the things I’ve noticed in everyday aspects of my life that point back to Him. I’ve been married for a little over two years, and my husband and I attend an Arabic Christian church where our faith is nourished alongside believers from around the world.
Learn How to Create Powerful Devotions With 5 Easy Steps
How to Get Seniors More Involved at Church