Uncertainty hangs on my life like a vague, white fog. A fog I’ve become familiar with; my friendly fog.

A few days ago, we ventured into the wilderness of Buffalo Peaks. A beautiful, clear day met us with chilly, yet refreshing arms. We meandered up a trail of broken sticks, soft dirt and the occasional shaded snow. The sunshine poking it’s welcoming nose through the trees, beckoning us up up up into the heart of the mountain. 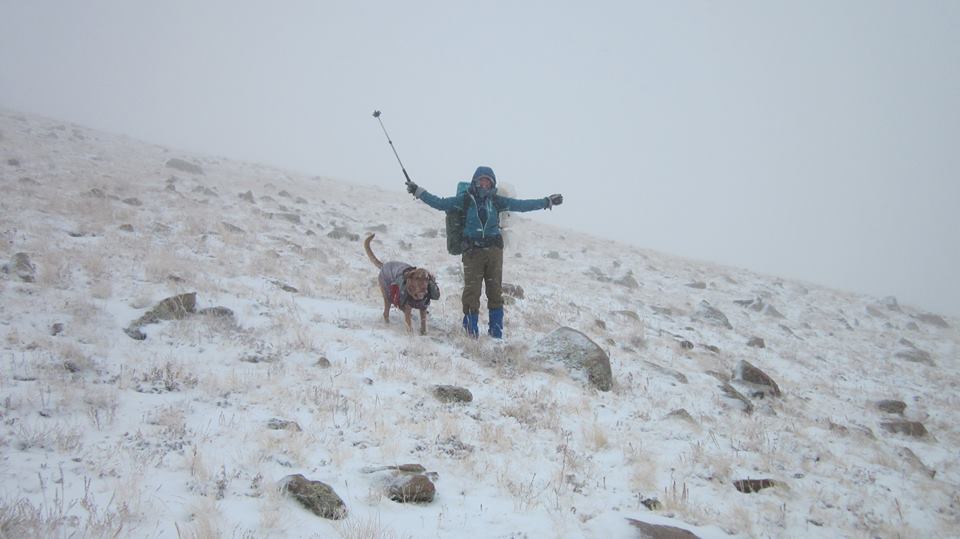 The next day was the polar opposite. We awoke from a restless, cold sleep to fresh snow. After chatting, warming up and falling in and out of sleep, we packed up our belongings. Alas, the snow was back. Beautiful, violent, windy. Foggy. I peaked my chilly head out of a crack in the tent zip to see if I could see the peak, which I had desperately wanted to summit that morning. I could see less than a meter in front of me. One meter, in any direction. My nose froze.

Snow is foreign to me. I’m a pure bred, water loving, sun kissed child of the Australian coast. I don’t know the first thing about weathering a snow storm. On a mountain. A 13, 000 ft mountain.
I put on 6 layers; singlet, light jumper, two Melanzanas (Colorado’s beloved), rain jacket, snow jacket. Rookie. Less than an hour later, I was tearing off three layers. Our boots were frozen; as I slipped my feet in, images of frost bite and missing toes flashed before my eyes. We quickly, without pause, packed up our tent, donned our packs, grabbed our poles and began our foggy descent. My butt became frequently familiar with the snows drifts, causing me to wail, “Hunterrrrrrrrrrrrrrrrrrr! Arhhhhhhhhhhhhh!”, giggle like crazy, then burst into tears. A serious emotional roller coaster. The hilarious things is that it wasn’t that bad. I felt like I was in the heart of a blizzard, on the verge of sliding off the mountain at any given moment. Like I said, snow is foreign. Beautifully foreign.

That trek down the mountain felt like a metaphor of 2015. When I stopped and thought about what I was doing, I was terrified and freezing cold. If I kept moving, I was overwhelmed by the beauty of the world, captivated by the snow, in love with the adventure.

Six months of travel, adventure, freedom and rest has been a balm to my aching soul. But, there’s always a ‘but’. There’s always a discontent, a fear, uncertainty.

The foggy uncertainty can rip at my lungs, disable my joy, clench my creativity.

It’s ironic. I’ve wanted freedom, adventure, wild terrain to explore; but now that I have it, I can cripple myself by being caught up in what this world says I need; money, a career, a house, a PLAN.

My God has been walking invisibly close in this time; I say invisible ’cause I’ve been ignorant of just how close He is. He’s been whispering to my heart; ‘be bold, be free, be courageous, my daughter.’ He’s heard my cry and gifted me with this freedom. ‘The devil comes to steal and kill and destroy, but I have come so that you may have life, and life to the full’ John 10:10.
Plans can wait. My plans are His. My joy is His. My adventure will glorify Him. It’s not conventional, but it’s real.

I’ve never been so thankful for uncertainty in my life. Heidi Gerberich is a High School English Teacher, experienced youth worker and outdoor adventure enthusiast from the east coast of Australia. In June, Heidi and her husband quit their jobs, gave up their house and community to live in Colorado chasing adventure and getting to know family. In these six months, Heidi has travelled around 10 American states, climbed seven 14, 000 ft mountains, explored three National Parks, backpacked through eight European countries and met countless inspiring people. Of all these things, Heidi has most relished the quiet moments with the Lord in the long journey up a mountain, or in sitting on a train through Europe, or in venturing through new cities and strange wilderness. This blog developed as a response to stop being a frustrated writer and start being a fearless writer. All for Jesus.
Give Your Study Time a Fresh Start With Bible Journaling
A FISH WITHOUT FINS