I recently wrote in a blog post: “What we don’t handle today, will need to be dealt with in the future.” And I have not been able to get this phrase out of my head since. We see this played out in many characters throughout the Bible like David and Solomon. We see this in the nation of Israel that didn’t obey God’s commands to drive out the giants in the land which led to generations of compromise. One of the most obvious examples, to me, is found in Genesis with the first family in the Bible.

Genesis 3 tells the story of Adam and Eve’s disobedience and God’s punishment of their sin. We read the devastating separation between God and humanity and today, we are still feeling the effects of their rebellion. This couple had been created and existed in perfection for their whole lives. Then, in a moment of weakness, they were forced out of their home and into the wild west.

When Adam and Eve disobeyed, I doubt they thought their actions would trickle down to their children. But they did.

Genesis 4 introduces us to Cain and Abel, and an incredible melodrama that would be fit for a soap opera or police procedural today. Abel offered a sacrifice that was accepted by God, but Cain’s offering was rejected. Cain didn’t handle this news very well and, in his uncontrolled rage, murdered his brother. Even though God warned him to guard his heart, Cain disregarded the warning, giving in to his basest desires. As a result of his actions, Cain was banished and forced to wander the earth.

The impulsivity from Adam and Eve is seen in Cain’s actions.
The separation between God and man only increased from parents to children.

I would bet that Adam and Eve told their children about God. They spoke of the beautiful place they had lived in and how they walked with God. After all, Cain and Abel were offering sacrifices to God before the Law was created that explained the rules of acceptable offerings. Yet, Cain’s rebellious nature wouldn’t be bridled and he brought physical death into the earth.

What are you passing on?

Life is much more interconnected than we’d probably like to think. I have picked up thoughts, ideas, quirks, and behaviors from others and I’m sure that others have picked up plenty from me. I believe that we have a responsibility and an opportunity to be more intentional with what we’re passing on. But before we can focus on what others are doing, we must first look at what has been passed to us.

In Genesis 4, God warned Cain about his anger issues yet Cain didn’t listen. I honestly wonder what the world might be like if this young man had humbled himself, listened, and repented. While we can’t change the world with a single decision, I believe that we can learn from Cain’s mistakes and repent early and often to create a better future for those around us.

Thankfully, Jesus is with us and for us. He doesn’t long for us to live in sin and shame and has made a way for us to be set free. My prayer is that we would continue to remove those things that aren’t of him, taking on his character instead. May we be a people who pass on faithfulness, goodness, hope, and love to future generations. But that begins with prayer, humility, and repentance today. 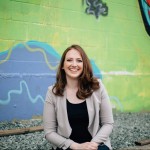 Sarah is an entrepreneur and published author, currently living in Dallas, Texas. Her dreams include founding businesses, giving strategically, and sharing art with the world. And her life motto is: Every number has a name, every name has a story, and every story is worthy of being shared.

You can find more of her writing on her blog or connect with her on social media.

Who Are You Impacting?
5 Things to Help Us Work Through Conflict