I often listen to audio sermons while cleaning the house. I am able to get the many ‘necessary’ things done, while engaging my mind and furthering my understanding of spiritual matters. For the most part, this is a purely intellectual exercise – increasing my knowledge of scripture, but not really leading to transformative change. Since I am busy, I often neglect to quiet myself before God and ‘listen’ to what He might have to say to my heart on the matter. Every once in a while though, I sense God breaking through the monologue, speaking His truth into my reality.

This was my experience recently. I was listening to a message that A.W. Tozer had preached in early 1956. I love Tozer’s passion for experiencing God in an intimate way, listening and responding to the Holy Spirit within us, and living the abundant life that God promises us. I was thrilled to discover that many of his messages are accessible online, and was immediately drawn to a four part series about living the abundant life.

The message was based on the experiences of the children of Israel following their deliverance from Egypt. Maybe you know the story. The Israelites had journeyed through the wilderness, and had arrived just outside of the Promised Land. A group of twelve men, leaders from each tribe, were sent to spy on the land and to report on what they had seen. When they returned, all of the men raved about how bountiful the land was. There was an abundance of water, which was not the case in the wilderness they had just traveled through. Water represented life. An abundance of water would provide an abundant life. They would not have to struggle to survive. There were delicious fruits such as pomegranates and grapes. A single cluster of grapes that the men brought back was so massive that it took two of them to carry it. There were figs, which were a luxury item. Something simply to enjoy. It was a land flowing with milk and honey. All of the men agreed that this land was bountiful, filled with both necessary provisions and an abundance of luxuries. It was truly a land of promise. 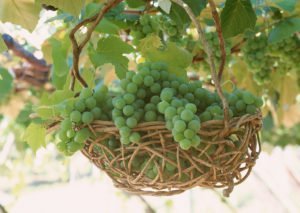 Ten of the men, however, advised against moving forward with God’s plan to take possession of the land. They claimed that the city walls reached to the heavens. They focused on the ‘giants’ who inhabited the land, men who were numerous and powerful.

These men were afraid.

These men recognized the beauty of what God was offering them, but were not willing to trust in his goodness to deliver on the promise. The path God was calling them to follow appeared dangerous, and they refused to move forward in obedience. Although the wilderness was harsh, dry and unpleasant, and their enslavement in Egypt was oppressive beyond words, they felt a degree of safety in the known. Fear clouded their perception. They forgot the truth of who God is – that he is good, that he always keeps his promises, and that he has plans to prosper his children and not to harm them.

It is easy for us to question what they must have been thinking; to ponder in disbelief how they could so easily have forgotten all that God had just done for them. And yet, are we any different?

I sensed God convicting me of this same tendency in my own life. The willingness to settle. We are glad that we have been rescued from an eternity separated from God. We are thankful that God sent Jesus to die in our place, to redeem us and claim us as his own. But how often do we put the brakes on his plans for us because they seem too difficult. We evaluate our situation based on our own resources, forgetting that God is our strength and that he will equip us for whatever he calls us to do. We allow fear to distract us. Just as Peter began to sink when he took his eyes off of Christ, we lose our focus on Jesus and become overwhelmed by the realities around us.

God has promised us the abundant life. The Spirit-filled life. Life that is drenched with joy, and overflowing with peace. Let us not be satisfied with living in the wilderness. Relieved that we have been saved from destruction, but too fearful to walk into all that he has in store for us. May we take the time to quiet ourselves before God, and listen for his still, small voice – believing his promises, walking in obedience into all he calls us to do, and embracing the riches that are ours in Christ Jesus.

The Lord will guide you continually,
giving you water when you are dry
and restoring your strength.
You will be like a well-watered garden,
like an ever-flowing spring.

May God richly bless you, dear one, out of the glorious riches of his grace,

Hi, my name is Kamea. I am sharing my story of being restored by my loving heavenly Father over at incrementalhealing.wordpress.com  Why incremental healing you might ask? Why not instantaneous, inexplicable, miraculous healing? Well, the truth is, that is simply not my reality. At the tender age of five, my innocence was completely shattered through the selfishness of others. I have struggled for most of my life with shame, guilt, and rejection, among other issues.  Several years ago, I sensed God prompting me to face my past. Since then, I have been actively pursuing healing, both emotionally and spiritually. The process has been slow and incredibly painful. There have been breakthroughs and victories, but many days are a struggle. Maybe you can relate.  It is my sincere hope that you would be encouraged by my story, knowing that you are not alone. May you be inspired to persevere through the hard places of your own journey!

Striving For Mind and Body Health
Not Consumed