I have a purple t-shirt with the words “I am a Survivor” printed across the back. My daughter says it is the most beautiful shirt I own. It was given to me at a local Relay for Life event, where I walked the first lap with other survivors. Those moments were filled with an array of mixed emotions as I strolled side by with grace-filled warriors. 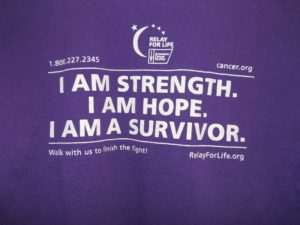 As we walked along the track encircling our high school football field, I passed hundreds of luminaries. Some of them were in honor of survivors, but many were in memory of those who had lost their battle. Their names were written there on white paper bags. Some I knew. Many I did not.

“Why am I here?” I silently questioned. “God, why was I spared, and they were not?”

When I was first diagnosed with breast cancer at the age of 42, my daughters were 12 and 15. During that same year, two of my oldest daughter’s classmates had mothers who were diagnosed with different cancers.

They both lost their battles.
I knew I should go to the funeral home to pay my respects to their families, but I just couldn’t. I was here, and they were not. I couldn’t reconcile it in my mind or in my heart.

Finding An Anchor in the Storm of Cancer

At the beginning of my cancer journey, I had a biopsy due to a suspicious-looking mammogram. The results wouldn’t be in for a few days, but God, through His spirit, whispered deep into my soul. He told me that I would have to go through this storm called cancer, and there would be times I would want to jump ship. But He told me to cling tight and trust Him. I knew He wasn’t going to take the storm away, but I knew He would hold me through every turbulent moment.

There was an inexplicable peace which sustained me in the weeks ahead as I waited for the first surgery. Until then, I wouldn’t know if the cancer had spread to my lymph nodes.

I’m not a patient person, but when cancer invades your life, you learn the uneasy task of waiting. It’s a large part of the battle.

You wait until the next test results, the next treatment or surgery, and the next gloriously beautiful dawn. And in the midst of the waiting, God fills in all the empty spaces.

[Tweet “In the midst of the waiting, God fills in all the empty spaces – @ssautrey”]

Thankfully, my cancer was the “good kind” and was caught in the earliest stage. I elected to have both breasts removed, followed by the reconstruction process. I had four surgeries over the course of the next year but didn’t have to undergo any chemo or radiation. It was a long twelve months, but there was no complaining, because God had spared me, and I was blessed beyond measure.

I was there to see my daughters head out on their first dates. I helped them pick out prom dresses, saw them graduate, and supported them through college and young adulthood. And just this past year, both of them were married!

I breathed in every moment.

During their weddings, there were moments when I looked at them from across the room and whispered silent thank yous to the Lord for giving me this gift of life. It was so very humbling and completely grace-filled.

Cancer is an ugly word. It redefines life as we know it and leaves many scars. It’s terrifying and sad and very, very difficult.

The One Who Battles With Us

But during the battle, God gives His grace in many special ways. Sometimes it’s in something small and simple, such as the tiny stone that lays on top of my desk. The word ‘hope’ is painted on it. It is a reminder that every day is filled with grace and that hope is found only in the love of a God who is bigger than any cancer diagnosis and stronger than any disease. 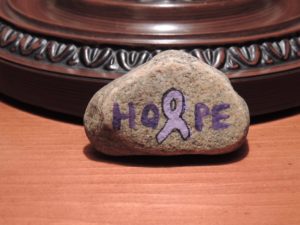 He is the steady ground when the earth shakes beneath our feet and threatens to swallow us whole.

He is the peace that floods our soul and helps us face another day with the certainty that He is in control.

I realize my cancer story isn’t as long nor as grueling as what many people endure. But the emotions and questions and doubts are still there, and it’s all part of the battle.

We fight hard and trust long in the One who hung the stars.

We hold tight to the Hope which floods into all our black holes of doubt and fills our battle with His grace.

I have a purple t-shirt with the words “I am a Survivor” printed on the back. And I am most greatly blessed. Sherri Autrey is a ten-year breast cancer survivor who resides in the heart of the Blue Ridge Mountains of North Carolina. She has been married to her husband, David, for 30 years, and they have two beautiful married daughters. She writes about inhaling God’s grace and stepping out in faith in her blog ‘Of Grace and Faith‘. You can also find her on social media via Facebook | Instagram | Twitter

Egypt: The Goose that Changed My Life
Who is this Jesus?