We Feel the Need to Question Why does this happen to me? Why does God allow so many bad things in the world? Why doesn’t He answer my prayers? Why would He ask me to do that?

What if Gideon would have kept considering himself the least of the least, and continued hiding from the Midianites because he was afraid and didn’t realize who he was in God?

What if Moses would have said no because of his lack of qualifications?

What if Rahab had let her sinful past stop her from helping the spies?

– unlikely heroes, that chose to believe what God said about them, instead of what the world tried to dictate to them.

As humans, we all feel the need to question sometimes. Some of us question EVERYTHING. I want you to ask yourself some questions and really ponder them with me today. Ponder people whose lives seemed to be a mess, situations that seemed hopeless and watch how God used them to bring about a glorious plan that was good.

What could possibly come from this bad thing?

What if Joseph‘s brothers hadn’t sold him into slavery because of their extreme hatred of him? Who then would have been there to prepare for the famine that was coming?

What if the Pharoah hadn’t made a decree for all the baby boys under two to be killed?

Then Moses would have never ended up in the basket that led him to Pharoah’s palace. He would never have become second only to Pharoah himself, and it wouldn’t have been such a huge deal when he killed the Egyptian that was beating a Hebrew.

But Pharoah did. And Moses fled to the place where he would eventually be called to serve God in a mighty way and deliver his people out of Egypt.

What if Naomi’s husband and sons hadn’t died? She never would have ended up back in Bethlehem where Ruth meets Boaz and eventually becomes great-grandmother to King David, of whom the lineage of Christ would come.

What if David hadn’t gone up to the roof that day? He never would have seen Bathsheba, who would later give birth to their son Solomon who built the temple and became the wisest God-loving leader that Israel would ever see.

And then Jesus came

What if Peter had not doubted and began to sink? He would never have experienced the immediate help and presence of Jesus’ hand in his own. What if he hadn’t denied Christ? Would he have been as diligent and faithful to spread the gospel?

What if Jesus hadn’t been “four days late”? Many witnessed the miracle that day and believed in Him, and others (Mary and Martha) had their faith increased.

What if the woman hadn’t been caught in adultery and humiliated in front of Jesus? Would she ever again experience such love and mercy? Such forgiveness?

What if Mary Magdalene hadn’t have been possessed? Would she ever have met Jesus and diligently follow Him for the rest of His earthly life?

What if Israel would have accepted Christ instead of crucifying Him? Would we ever know grace? Would I truly understand God’s love for me and all mankind? Would I have been able to make it based on my own righteousness?

All things work together…

For every bad, there is a good for us that love God. All the instances I listed have known results that were good, but what if we don’t know what the result is? What if it hasn’t yet happened? We can then trust that the outcome is or will be good because scripture says that “all things work together for good to them that love God…” (Rom 8:28)

When you are facing a giant in your life, a battle that it seems you may lose, a situation you let yourself get into and see no redemption from- I want you to consider the people mentioned above. Put yourself in their shoes and imagine how hopeless it all must have felt. But then God stepped in and did what He does. And that’s good. He makes a way when it seems there isn’t one. He heals the brokenhearted and binds up their wounds.

Even as our Lord’s lifeless body was laid in a borrowed tomb, and it seemed that He had lost, oh friend, even then He was fighting the war that had been waged for our souls. When the fight was over He claimed that body in the tomb once again, He rolled the stone away from the door and He stepped out in all of His glory. The ultimate happy ending! And you too can have a happy ending no matter what circumstance you’re facing. 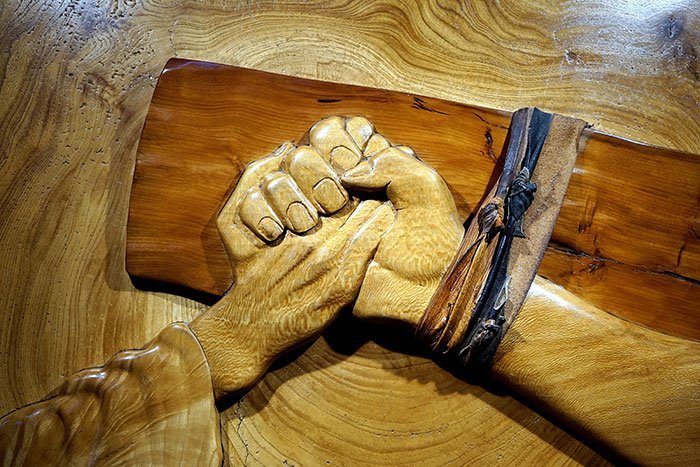 Give it to God

Do you know God? You can! Romans 10:9-10 says “That if thou shalt confess with thy mouth the Lord Jesus, and believe in thine heart that God hath raised Him from the dead, thou shalt be saved. For with the heart man believeth unto righteousness, and with the mouth confession is made unto salvation.”

Do you love Him? Then claim the promise of Romans 8:28 and give all of your “what ifs” to God, and rest assured that your “good” is in the making.

Such is the love of God
Handmade Holiday Gift Guide