As Christians, many of us have a heightened sensitivity to the negativity that exists in the world, which can often leave us emotionally exhausted by the time our heads hit the pillow each night. Everything from bad news reports, trouble on the job, or financial concerns are just a few of the obstacles that can quickly put our spiritual gas tanks on empty. However, it’s essential that Christians seek to refill their faith daily with God’s premium words and not the unleaded alternatives that the world gives. Thankfully, some of the best Christian apps for daily use are available on our phones to help us replenish our spirit.

There are tons of options for Christian apps that focus on a variety of topics. However, we found that the most helpful Christian apps for daily use provide resources for meditation, prayer, and community engagement, all within a single application. Here are the Christian apps you need to use daily to help you survive the grind:

Must-Have Christian Apps For Daily Use

We tested these apps to get a feel for their design, features, and responsiveness for Christians looking for a go-to daily biblical resource. Also, we have assigned a letter grade to each app based on these criteria. Design and Layout Score: A

The Whispers app is stunningly beautiful, immersive, and intuitively designed making it the number one pick on our list. From the moment the app is launched you are taken into a media-rich home screen layout that allows the user to swipe through a list of gorgeous video backgrounds to use on the home screen. This includes natural and serene environments such as an ocean sunrise, mountain clouds, or even a school of jellyfish swimming in the ocean.

What we like most about the home screen layout is that the buttons are small but functional, thus, not detracting from the Zen-like meditation of calming video scenes and nature sounds. In the middle of the screen, there is a Bible verse, which seamlessly ties the background scene into the word of God in a seemless way. Overall, a fluid and unmatched user experience.

The development team at Whispers really took their time when thoughtfully designing this app, and it definitely shows. What we enjoyed most is how the app has built-in mechanisms such as tracking your meditation time and daily-streak scores to keep you continuously engaged with the word of God. There are tons of different bible meditations to listen to, the ability to create a journal to keep track of your thoughts, and a social network that keep users engaged in the community.

Most apps that come packed with this much functionality tend to be slow and laggy, usually because the app’s backend lacks adequate server horsepower to make things run fast. This app is smooth and fluid with very little noticeable lag time.

The Whispers app sets the bar high when it comes to Christian meditation apps and is an absolute must-download. The only downside of this app is that there isn’t a clear way, at least on the Free Version, to create a custom meditation topic. All of the mediations are pre-programmed, and it would be great if a user could choose multiple topics to be included in a single custom meditation. 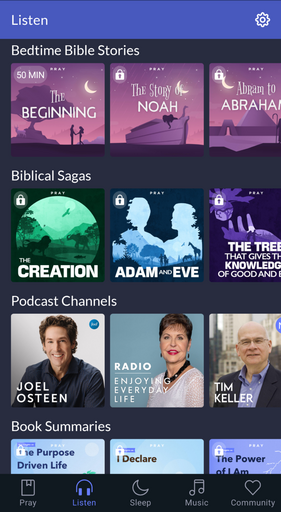 The Pray app makes the second spot on our list because it’s packed with features. However, the design and layout leave more to be desired and will need an upgrade to compete with apps like Whisper. It’s not that the Pray app is poorly designed; it just doesn’t stand out from the crowd, especially when compared to top tier Chrisitan apps. Also, because there is so much content to discover in this app, the design feels overly cluttered and slightly overwhelming.

This app is packed with features and essentially curates various media products such as Christian books, podcasts, music, and meditations. It functions more like a Christian product marketplace, more so than a traditional mobile app. However, it provides users with tons of things to explore. The downside is that many of these features require the paid version to use.

If you don’t mind paying for a Christian app, then Pray should be high on your radar. The app has a lot of features and is packed with third-party Christian content creators. This app is good for daily use if you want more than just meditation and looking for a complete Christian resource marketplace. The Reflect app takes the number three spot on our list for best Christian apps, but not because it wows with its’ user interface. Focused mostly on providing users with biblical meditations, the Reflect app offers a basic layout with static icon-based buttons on an ultra-generic white background. While this does make navigating the app very straight forward, it leaves a lot to be desired in terms of presentation and user experience.

Reflect is somewhat limited in both features and consumable content. However, many of its’ features are Free, which is perfect for users that are only looking for non-paid Christian apps. One major benefit of Reflect is that you can download meditations from the app directly to your mobile device.

Because it lacks a true dynamic interface, there isn’t much to judge in terms of overall responsiveness.

Reflect scores points because it offers quite a bit of free and downloadable content; however, it is easily one that you can forget is on your phone after a few uses. 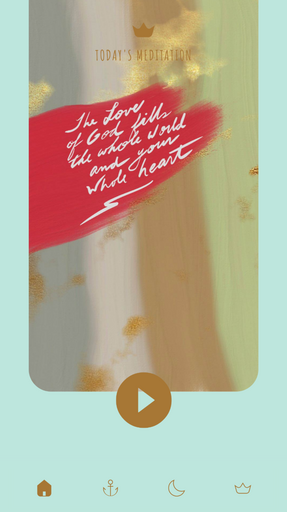 If Pinterest had a baby with a Christian app, it would be born as Soulspace. This Christian meditation app has a very attractive user interface that is pleasing to the eye, and the overall layout is open and uncluttered, which is always a plus.

While the app has a lot of potential, there isn’t a ton of depth outside of the meditation component. Another downside is that there is very little free content available, making it difficult for users to decide if they have seen enough to want to purchase the paid version.

The app is fluid and responsive, with only a few minor user interface issues.

Soulspace is a swanky Christian meditation app that will give you a soothing experience for a price, but lacks a rich feature set and free content available to users.

iDisciple has a fairly standard side-scrolling layout; however, it is far too easy for the user to become distracted with the many popups asking the user to sign up for the app’s paid version. In terms of layout, iDisciple functions more similarly to a traditional blog than an intuitively designed mobile app.

Even though it doesn’t have the most robust feature set compared to other Christian apps, iDisciple shines in terms of the quality of their content creators, including well-known names in Christian ministry and physicians who contribute to the app. Also, there is a decent amount of free content that allows a user enough engagement to decide if they want to move forward with the app’s paid version.

The app can exhibit painfully slow loading times, which can cause users to look elsewhere.

With the number of quality contributors on the platform, iDisciple should be a lot higher ranked on this list. However, due to a laggy user experience and frequent prompts to become a paid member, it will take some significant technical overhauls for it to take the next step to compete with the best Christian apps in the marketplace.